4 Reasons to visit Georgia in the Spring

Home » 4 Reasons to visit Georgia in the Spring

What I hope to accomplish in this post is 1) to tell you a little bit about a recent trip to Georgia, and 2) talk a little bit about how the photos in this post were taken.  Oftentimes, friends will ask how I took a picture or what I was doing when I took a picture.  I am not a super technical person, so I hope my explanations are simple and easy enough to understand if you want to try.

First — where I was — The Golden Isles of the Georgia Coast.  Big Oak trees dripping with Spanish Moss; shrimp boats tied up at the waterfront and huge historical plantations – I never really though of the Georgia coastline as a destination filled with photographic opportunities. Boy, was I wrong — the coastline is beautiful and dotted with barrier islands making the landscape irregular, and a lovely mixture of rivers, streams, swamps, and estuaries.  Plenty of things to photograph.  And, you don’t need interested in photography to simply enjoy walking around and enjoying the landscape.  If that doesn’t interest you, the food will.  Georgia shrimp were simply the best shrimp I’ve had in a while.

Here are my 4 main reasons why I loved the Golden Isles coastline and how I achieved the images that accompany this post:

For me, this was the highlight of the trip and if you are going to be in this area, it is one location that you should not miss. Driftwood Beach is exactly what it sounds like – an unspoiled beach where beautiful driftwood and trees have washed ashore. It was especially beautiful at sunrise with the trees silhouetted against the color in the sky.

My featured image was a long exposure shot that was taken at about 9:00 a.m. and as high tide was moving in.  What I like about this photo is the contrast between the tree limbs which are very sharp and in focus and the softness of the water.  To get this effect I had to set up my camera to do a long exposure — so keeping the camera’s shutter open for almost a minute.  Photographer, Mark Hilliard was instrumental in helping me understand how to do this.  First, I needed to place a Neutral Density “ND” filter in front of the camera’s lens.  An ND filter basically stops light reaching my camera sensor quickly, which allows me to keep the camera shutter open for a longer amount of time (think of putting a very dark piece of glass in front of a camera lens). Any movement that is recorded, like the water, will essentially be blurred, while anything that remains still, like the branch, remains sharp and in focus.  Long exposure is not hard (if I can do it – trust me, anyone can) – but it does require that you have a few things in addition to a camera.  You will need a tripod, shutter release and, of course, an ND filter. 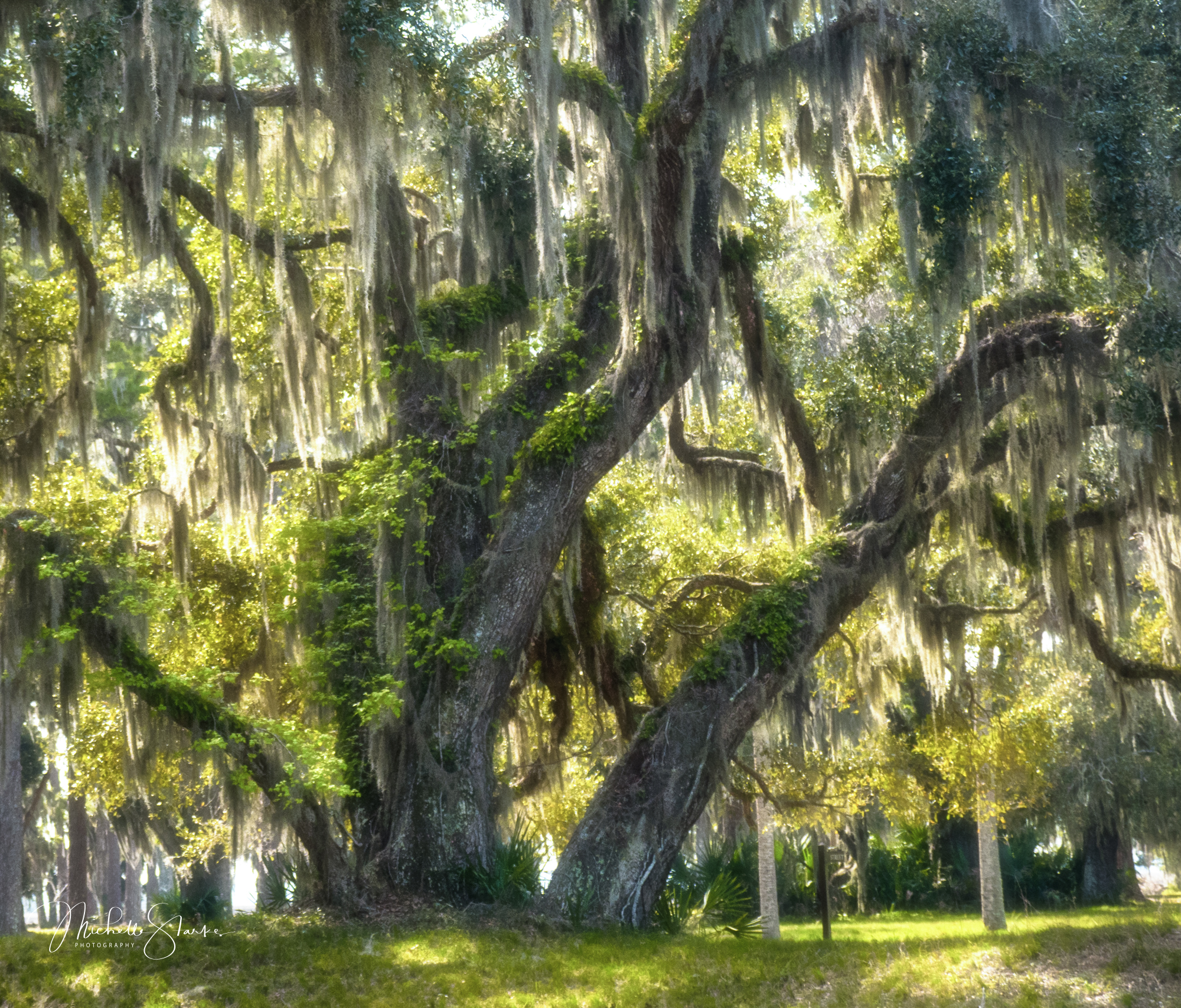 Spanish moss hanging from majestic oak trees instantly reminds me of sultry summer days in the South. I was fascinated by the huge oak trees dripping with Spanish Moss and curious as to why 1 tree would have massive amounts, but the very next tree would have none.

Because I’m the queen of miscellaneous information, I checked this on Google.  Google says that although Spanish Moss grows on trees, it is not a parasite so it doesn’t suck the life out of the trees. That’s nice to know.  It got its name from French explorers who thought the Spanish Conquistadors beards reminded them of the moss. Thus, Barbe Espagnol became Spanish Moss. Apparently, the features of big Oak trees (long horizontal branches) make them good hosts for Spanish Moss to grow on which is why trees like Oak are covered with it while other types of trees are not.

At any rate, find a big Oak tree and you are bound to find lots of Spanish Moss covering it. I found the trees in Fort Frederica Historical Park particularly beautiful to photograph, but I did struggle with how to capture the whole scene. With so many large trees and Spanish Moss hanging over everything, it was hard for me to figure out what to focus on. I ended up just focusing on the larger trunks of this Oak with the light filtering through the moss. The moss reminded me of hair, so when I went in to edit this photograph, what I tried to do was soften the image so that the moss looked like silky clumps of hair. 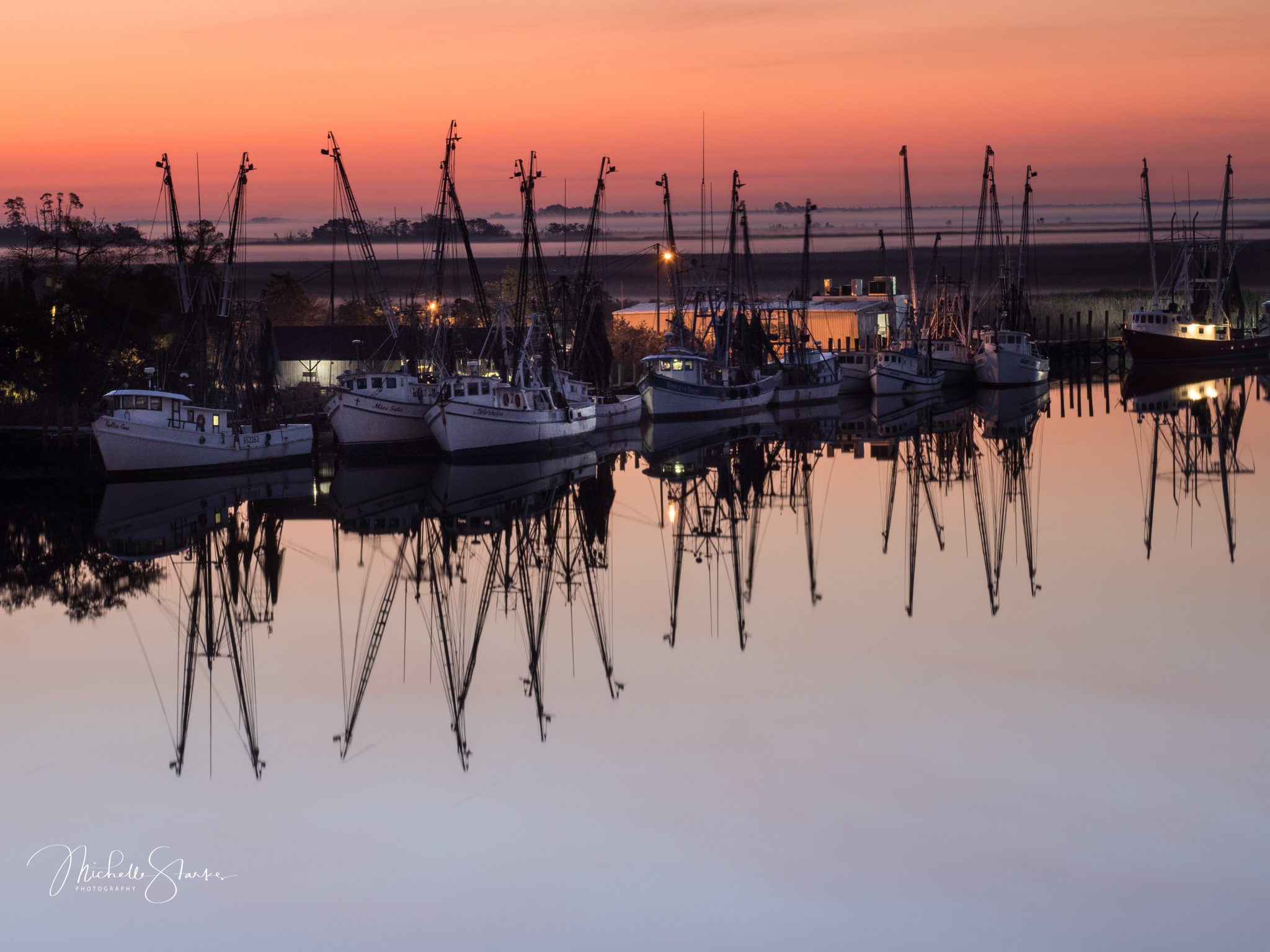 Commercial shrimping defines the look and the feel of the Golden Isles coast, and I will say the shrimp they catch, was some of the best that I’ve tasted in a long time.  For me, it would be difficult to describe or show images of the Golden Isles area without including shrimp boats.

Photographs are always going to have much more impact if you take them at sunrise or sunset when there is color in the sky.  For this image, we were set up to capture the color in the sky before sunrise. Similar to the featured image, I used an ND filter. This particular filter, however, just focuses on slowing down the amount of light in the sky — that is how I got that deep orange color.   I also took advantage of the still water and captured the reflections of the boats in the water.

Shrimp boats are generally old and you are bound to find something rusting on them so it’s not something that I am typically drawn to photograph.  But they are interesting — especially if there are people working on them.  Oftentimes, I like to fade into the background and observe people going about their daily lives, and I was lucky enough to go down to the docks and watch a worker repairing his nets for his next journey out.  He had been working on a boat catching shrimp his whole life and was kind enough to allow me to photograph him working. 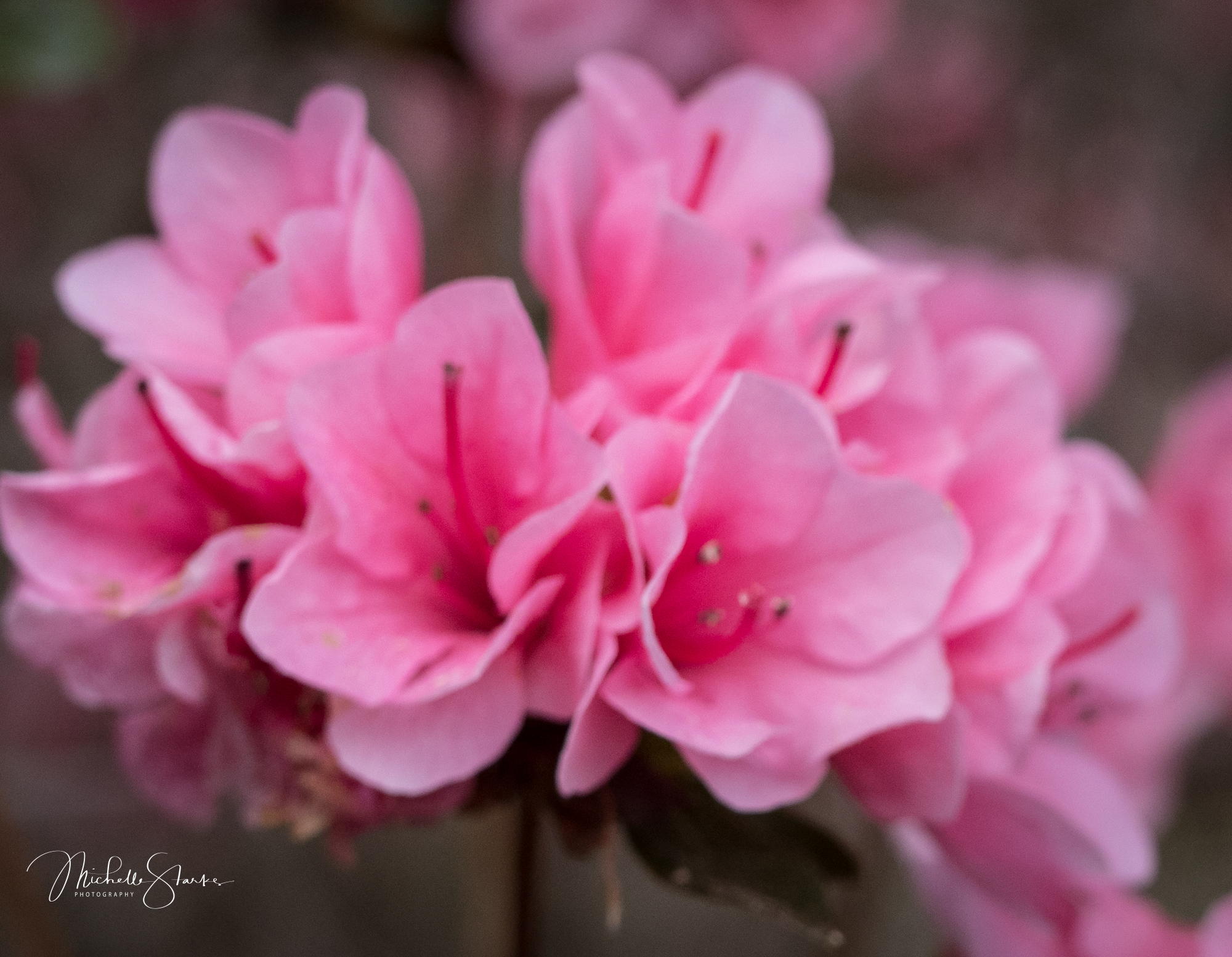 Spring flowers. Beautiful flowers were in bloom all over the coastal isles.  I never tire of photographing flowers and I had multiple opportunities to do so with the abundance of azaleas in bloom. The image I have chosen here is one that I took in a very old cemetery which was full of azalea bushes and other flowers.  With this particular photo, I used a macro lens to get a close up picture of these flowers.  When I initially looked at the photo after I got it off the card, it still was not as close as I wanted it to be, so I edited the image a bit by cropping it. I then added a blurred effect to make the image appear very soft.

I hope these photos give you a good sense of place and more importantly inspire you to think about traveling to a place that haven’t really thought about before.  So, travel to the Georgia Coastline — in the springtime — a definite “yes” for me.  Take a camera?  Absolutely.  Even if you don’t have ND filters, macro lenses or a tripod, you will be able to take absolutely gorgeous photos with a camera phone if that is all you have!

Final Note:  I am very thankful to Photographers, Mark Hilliard and Jamie Kornarski Davidson from New Life Photos for all the technical help with learning to use filters.  If you want to learn more about photography in beautiful locations, I would highly recommend Mark and Jamie.  Whether you are a total beginner or are very experienced, both were extremely patient and giving of their time to ensure that everyone left Georgia with the images they wanted to achieve.  Thanks Mark and Jamie! 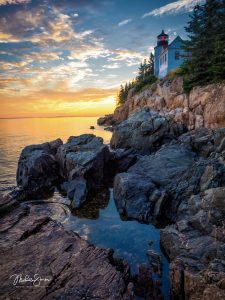 5 thoughts on “4 Reasons to visit Georgia in the Spring”